Guess Seinfeld was already bought by Apple, he’s got a Mac

In fact, that series ended with Twentieth Anniversary Macintosh - Wikipedia

Basically, a few years back when i first starting using Special K, i managed to get Custom Reshade working properly after HUD in Arkham City. Eventually, tried again maybe a few months ago with the latest SK version and ran into some weird HUD issue. The compass doesn’t seem to disappear, it just flickers to a “draw on top” state. It’s not a constant flicker either, it depends on where you face the camera, but you can’t force it either, it happens randomly and can sometimes take almost a minute to show up again.

Fast forward to the now and i’ve been testing the game again. Same issue, and i’ve tested with config edits to the game, as well as disabling whatever textures i can in the shaders (disableiftexture). Also tested vertex shaders instead of pixel shaders (the HUD exists in both groups), and i’ve tried both at the same time. I also searched up old Steam posts and cross referenced the date i made that Special K Arkham City video (where i got the HUD successfully triggering after Reshade) and downloaded the same SK version i used there, but local installation doesn’t work with that version of SK for some reason. Can’t test global injection with that version for some reason, though i don’t think it matters to. SpecialK 0.8.50.4 should be the version btw. Don’t know if Windows and driver updates have changed anything for the worse.

You can see the compass at the top of the image. This is how it should look, i enabled mxao debug mode for clarity. 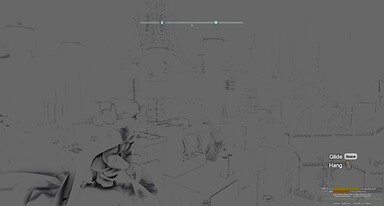 But i get flickers where the compass fills the horizontal space. I’ve forced draw on top to actually catch a sc since it flickers quite fast. 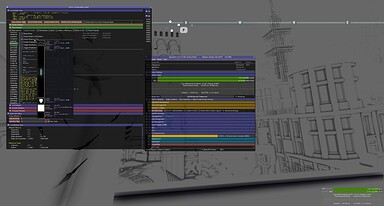 Any idea what’s up and any suggestions?

This is how it was in the video i mentioned, and i tested a few hours worth of the game back then without experiencing the flickering issues.

It probably uses more than one shader for the HUD.

Also, if you’re discussing ReShade trigger logic, you should probably have “Show OSD in Video Capture” turned on or stuff will happen out of order.

It probably uses more than one shader for the HUD.

It sort of seems to?

Multiple shaders make up different parts of the HUD and UI, but some of them intertwine to an extent. I have tested each shader on their own though, to see if i could isolate it to one shader, but all of them relating to the compass cause this issue. I’ll try out the Show OSD in Capture option.

This is surprisingly good.

Also, if you’re discussing ReShade trigger logic, you should probably have “Show OSD in Video Capture” turned on or stuff will happen out of order.

I only have one idea left to try, and that’s setting the res to a 21:9 aspect ratio, like in the original video. I may be really stupid for testing 21:9 lol.

Judge me all you want. Seems like true next-gen to me.

Curious choice of music in that trailer…

I kind of muted the video when the song played

I usually do this whenever i hear any song with lyrics. Those numbers are cartoonishly perfect…

I really should drop what I’m doing and release my framerate limiter as a standalone open source library. Get it built-in to most shipping PC ports and then RTSS (for framerate limiting) will be obsolete.

Hmm so after Castlevania it seems Netflix is going to be showing Dragons Dogma.

Haven’t watched the Castlevania one, don’t have Netflix either but it seems to be well regarded or at least a source of good quotes.

And for CRT displays.

3x Sony FW900’s which seems to be very well regarded and then this person stripped down the existing shell around the panels and put back together this for a triple display instead.

They’re alright… CRTs have issues with focus on wider aspect ratios due to voltage limits on the deflection yoke :-\

The 4:3 FD Trinitron tubes (e.g. SONY GDM-F500) are the holy grail of CRTs. The closer a tube is to square, the easier it is to focus.

Ah so the actual tube hardware and differences in that then or how their design affects things.
Learned something new there, was under the impression the tube was usually more rounded or like a bulb in it’s design but taking a look at that then yeah there’s some almost square designs too.

Guess the tech got pretty good before LCD’s replaced it in the early 2000’s although it would be a few years before LCD quality improved but I suppose form factor and weight already made the smaller panels more popular on average.

Plasma as a thing in the TV market but that appears to have ended too with new LED technologies particularly OLED and variants more recently.
(Bulky though but not even close to the bigger CRT models plus still a bit more compact in form too.)

EDIT: Maybe about time for a new TV I suppose, still have the old 2005 Plasma but then there’s nothing much to watch anyway most of the time so not really much of a priority.

Flat trinitron tubes have finicky convergence / landing adjustment required in addition to the pincussion / trapezoid / … stuff that makes calibrating CRTs so much fun (lol). All of this stuff degrades over time and then you have to recalibrate the display’s picture geometry.

This is ultimately why CRT became irrelevant IMO. LCD was inferior in terms of resolution and contrast, but an LCD’s image does not change shape over time and was easier to manufacture @ 16:9 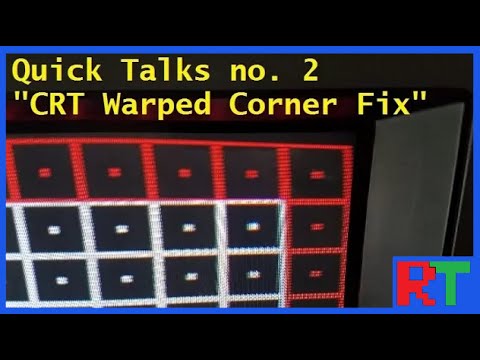 The joys of CRT ownership…

@Kaldaien Microsoft flight simulator is imposible to inject right? Damn uwp games. Just got it with game pass and it`s amazing. But it could really shine with better framepacing

It might be possible. I cannot get the game to run past the main menu without crashing, so I put it aside. I’d have to get the game running before I can even see what needs to be done to use Special K in it

Sometimes the UWP system just behaves like some unstable temporal dimension that just can’t quite exist in this one and users have to go through all kinds of rites to get it to be at least still enough to where the summon process (Installation.) just won’t outright end up in a infinite black hole somewhere.

Even when that appears to work the thing can still be finicky and crash prone for any number of reasons and validating the files or retrying often becomes a full re-download plus the file system and install path can be very sensitive along with OS compatibility if you aren’t on the latest version of Win10 or even some upcoming insider channel plus there’s no real release notes so store updates like the one from earlier today or underlying apps like the various XBox ones for account validation and overlay functionality you never really know what changes.
(The store icon is different now that’s a thing. ~ )

It’s worked well enough but it’s it’s own weird strange thing that just doesn’t make much sense and it kinda works or doesn’t work a bit on it’s own volition to and from plus with the various sandbox and encryption bits and what not users can’t really configure or troubleshoot the downloaded apps or the core functionality at all.

No idea how overlay compatibility is or hooks either through Windows processes or app processes like the shell one (Application frame host and the shell experience host I think it was for some of these) but there are some tutorials and ways to hook into the render window including documentation but probably late enough to where some of the SpecialK D3D overrides won’t apply.

Game should get a D3D12 API update eventually and if they go with flip model presentation and flip discard and other tweaks the latency and frame pacing could improve along with more direct GPU and CPU control and general improvements to multi threading and such.

EDIT: Suppose the Unstable Windows Platform system still has a ways to go and improve on.

I am fairly certain that flip model is required by UWP. It’s been a requirement for all Windows Store apps since Windows 8, and UWP is kind of the next evolution of the Windows Store / Metro design language.

I believe so as well – for actual UWP apps that is. The same rule does not apply for Win32 apps packaged as AppX packages and managed through the Microsoft Store.

Those titles can still (and often does) make use of bitblt.

Ah I was curious on that, think D3D12 makes it mandatory but the Windows Store also uses many programs or games that use D3D11 which until more recently hasn’t utilized flip although the store environment is a bit different than regular Win32 desktop and there isn’t any issues around backwards compatibility or Windows 7 in the same way.

Although software released across multiple systems like Steam, GOG, Windows Store is probably just packed and compiled with smaller differences for what’s needed and a few extras perhaps.
(Steam’s API, GOG and it’s Galaxy client and how this Windows store works.)

Might not be that different for developers though now that it also does Win32 so it does not need to be in the UWP container system or how it worked again.

Microsoft is changing things around a bit too, DCH driver model is being updated a bit as well and some of the existing functionality is being moved into this app structure too.
But I don’t know how the store itself and it’s functionality or requirements could change, interesting to hear about mandating a flip model present interval / vsync mode though and since Windows 8 (8.1?) even.

EDIT: Eh the entire OS is changed up every half a year to a year I suppose with the current development plans and the roadmap for Windows 10 itself although with some tweaking for the users participating in the insider testing so it’s dev, beta and preview now instead of fast, slow and preview.

Less full builds on the beta branch for now too plus 20H2 ended up being a cumulative update and enablement package again but it’s nice not having to reconfigure the entire OS and settings for the full install and build distributions at least.
(Well that will probably change when 21H1 is branched off and goes into something like a beta stage before full distribution.)