Just the widgets for now.

A friend of mine has had some audio crackle and perhaps some stutters as well when using the same settings as me; the recommended borderless windowed settings, minus the backbuffer=2, which causes the game to crash at start. Leaving at =-1 is fine. Says the crackling happens whenever any frames drop by any amount below the cap, current cap being 60.

Curious if anyone knows why that is happening, or what is causing it. Can provide a pastebin of the settings if requested.

By the way, the on-screen display works in Kaldaien’s latest specialk dll version that you can find in his #releases on discord. Ctrl + shift + backspace in-game and it comes up, along with the banner up top when the game boots up.

I’d recommend just removing the Special K config file entirely and start from scratch. Any ‘recommended’ presets were for non-DirectX 12 enabled versions of Special K and intended for an unpatched copy of the game. Following the patches of the game, those same suggestions/recommendations don’t really apply any longer.

Throw in latest version of Special K to the game, leave every option to their default, set the FPS limiter to what you want, you’re basically finished.

By the way, the on-screen display works in Kaldaien’s latest specialk dll version that you can find in his #releases on discord. Ctrl + shift + backspace in-game and it comes up, along with the banner up top when the game boots up.

The OSD that’s spoken of is the yellow OSD text in the top left corner of the game. This feature (which relies on “CEGUI”) will never be compatible with DirectX 12. Kaldaien is planning to re-implement that OSD functionality using the modern widget/control panel-based UI that is the ones that exclusively work in DirectX 12 for now.

Backbuffers must be set to 3, they patched the game recently and changed that.

Hello, how can I get the link to download Special K? I don’t know how it works

For D3D12 compatibility the 64-bit .dll from this topic or newer would be good.

I have finally implemented basic support for D3D12 in SK’s UI, and now I expect a lot of unintentionally missing things

I am creating a Wiki of known things that need to be implemented, and would like users to add anything that seems to be missing. HDR Luminance Control 1.1 Finished for SK’s UI (11/22/20) 1.2 Incomplete for uPlay / Steam / Discord Text OSD / Command Console Steam Achievement Popups (no ETA) HDR Screenshots G-Sync Status [ Impossible, due to incomplete driver…

This file and then renamed as DXGI.dll in the game folder would be my method as a local DirectX injected .dll for the game.
https://discourse.differentk.fyi/uploads/short-url/ukf24kedNqLriRnzcWrO4najqv4.7z

Due to the bug fixes and improvements I believe the main advantage remaining is the SpecialK framerate limiter much of the other initial issues have since been resolved.

There’s a January 1st compile somewhere I think that’s the most latest compiled version but I don’t think there’s too much of a difference over what this has.

These contain various DirectX 12 / D3D12 improvements and changes.
Discord one should be good overall can also use the Discord channel from the above links with the wiki, download and such for additional info or help if required I haven’t seen Kaldaien active on these forums in a few days but he might be online on the Discord server for example.

I couldn’t get the latest DX12 supported version of SK to work with Horizon, I wonder if I’m doing something wrong.

Hello could someone help me with the special K? I’m trying to use it at horizon zero dawn but it still keeps getting stuck and it gets even worse, and it keeps using 100% of the processor, before it wasn’t like that

Is that right @Kaldaien ?
Thanks

A month or two ago, that would have been correct… SK supports its overlay in D3D12 now, though. It’s all a million times simpler than that.

Just extract that to the game’s directory (as dxgi.dll), then open the in-game config UI.

Turn on the framerate limiter, and you’re more or less done.

You can fiddle with all the other settings in real-time if you want, but that’s up to you 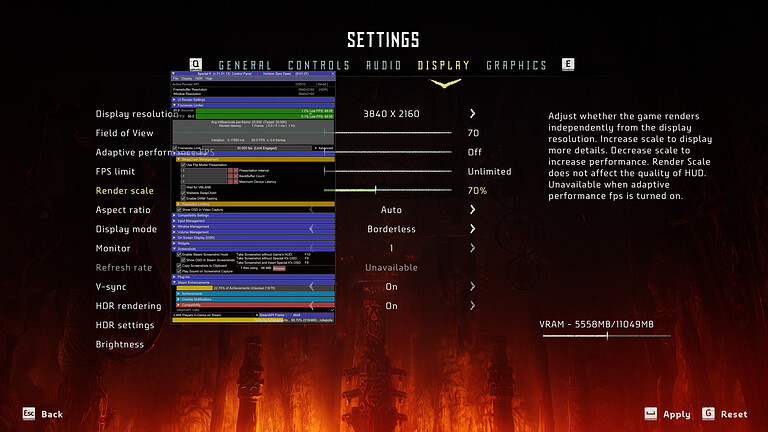 They actually want this game to be great on PC.
How wonderful…

I tried to install SK locally for HZD on my EGS install, but it doesn’t work. The game just crashes before I can even see it icon in the taskbar. Global SK install didn’t work either. What can I do ?

What I would start with is to take the newest compiled 64-bit SpecialK64.dll file.
https://discourse.differentk.fyi/uploads/short-url/kFeY5N8MnnGEqx14YpLclEbkrY9.7z

Put that in the game folder as either DXGI.dll or D3D12.dll

If it crashes then it should have generated a DXGI or D3D12 .ini file.

This disables Steam functionality the game being from Epic Games Store would not need this and it avoids problems if there’s a bundled Steam_Api64.dll file.

Might also see if only having the D3D12 API enabled works.

This could work just from the .DLL update though without having to go into the config file at all.

SpecialK has updated a bit since 0.11.0.50 and the latest I think was 0.11.1.0 but these builds are still a bit of a work in progress but Kaldaien occasionally posts compiled versions in the D3D12 topic or on the Discord channel.

The above link should be from January 13th as the latest available for the moment.

EDIT:
A whole bunch of DirectX 12 compatibility work and a number of other changes, some of the embedded files found in the topic might be more recent as well but the opening post file or the download URL in the top menu on this website are a bit old.

Should eventually be resolved once the current work in progress build fully replaces the existing version.

In this way you can use either local or global injection with the newest posted .dll files and updates.

Thanks. The Steam silent log seems to let me run the game. But the game starts in a window, that I can set to full-borderless or fullscreen. And then the games crashes when trying to launch the benchmark.

Logout and back into Windows. That usually fixes the game when it starts doing this. I think it’s an NV driver bug.

Sorry, I mistyped. I meant to write “CAN’T set the game full-boarderless or fullscreen”

EDIT Tried again, with different version of SK, but it still crashes when I try to change resolution or mode.

Well, I’ve tried getting SK, reshade and Freestyle/Ansel to work, to no avail. However, now my game crashes after loading. It’s the same crash (I think) that I got everytime I tried to use SK or reshade Looks like I’ve broken something.

I reinstalled everything, and reset the nvidia profile in nvidia profile inspector, but it still crashes… What else should I do to reset thing ? I tried to use the SKIF at some point, does it leave stuff behind ?

SKIF doesn’t leave anything behind. Provided it says ‘Not Running’

You may need to clear the D3D12 shader cache. Delete *.bin from LocalCacheDX12 and then restart the game. It’ll re-compile the shaders the next time you start the game.